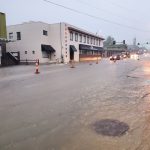 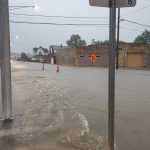 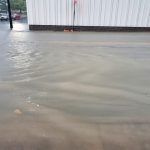 Unfortunately, very little relief from the rain is expected today and for the rest of the week.  Listeners are reminded to be aware of flash flooding and to never cross a roadway covered by water.  Remember…turn around…don’t Drown.  Just as the name implies, flooding last night occurred in a flash and was gone almost as quickly.

According to the National Weather Service, Dubois County saw a range of five to five and a half inches of rain Sunday.  Jasper saw four and a half inches and could see another two inches today.  At least three to four inches of rain fell in a short period of time between 5:30 and 7 overwhelming storm drains, ditches, parking lots and eventually buildings.

The Schnizelbank Restaurant was flooded with water as flooding down the Third Avenue flowed into the building.  The truck lot at Uebelhor and Sons Chevy was flooded as was the lot and building of Pet-Agree all in Jasper.  The intersection of 6th and Newton was under water as was the 4 way stop two blocks south.

In Huntingburg, the street department broke out the sandbags to hold back the water.

The corner of Highway 64 and US 231 was under water.   19th Street in Huntingburg was also flooded.

Many reports of limbs and trees downed or fallen dot the area.  With high winds and saturated grounds, tree roots will lose their grip and fall.  Beware as you travel.

State Road 64 west from the Eckerty “Y” is closed until further notice due to the roadway collapsing from underneath.  Plan an alternative route.

Saturday night, in Central Indiana, severe storms caused floods and produced at least six tornadoes, leaving thousands without power and damaging buildings.   That number of tornadoes confirmed could rise to nine.  No injuries were reported.  The National Weather Service says the tornadoes touched down in Green, Owen, Monroe, Marion and Rush counties.   Winds from an EF-1 tornado reached 100 mph in Marion County’s Beech Grove where the high school was heavily damaged.  Fire officials say the corrugated steel roof was ripped off the school.  Updates also include an EF-2 tornado in Greene County with peak winds of 130 mph Saturday night that damaged a building and downed trees.

Due to weather, the invasive species group will be postponing their workday at the Dubois County park originally scheduled for tomorrow morning (Tuesday 6/18/19)   The workday will now be on Thursday, June 27th from 8am-noon.